The EnerOne battery storage system, the STABL SI 100 modular multi-level converter and the Voltfang Industrial commercial storage system made from second-life car batteries are all examples of innovative products within the storage industry.

The smarter E South America: Brazil proves itself as a major player in the global solar energy market

São Paulo, August 26, 2022: Solar Energy as an important source of generation of new investments, tax collection and jobs in the country, has just reached the historic mark of 18 gigawatts (GW) of installed power, tends to place Brazil among the main global players in the segment. This is the evaluation of the experts, authorities and exhibitors who participated in The smarter E South America. South America’s largest event focusing on the new energy reality took place at Expo Center Norte in São Paulo and gathered more than 400 companies and 44,000 visitors, another strong growth compared to the 2021 edition. 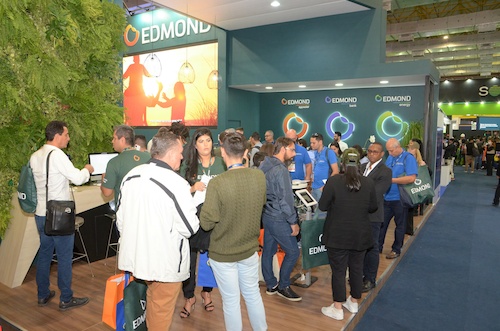 Dr. Florian Wessendorf, Managing Director of Solar Promotion International GmbH together with the chairman of the Intersolar South America Conference, Rodrigo Sauaia, CEO of ABSOLAR, welcomed Eduardo Soriano Lousada, Director of the Department of Applied Technologies of the Ministry of Science, Technology and Innovation, Sibelle Silva, Director of the Department of Innovation Support for Agriculture at the Ministry of Agriculture, Livestock and Supply, Paulo Guimarães, Superintendent at the Secretariat of Economic Development of the Government of Bahia, Fernando Chucre, Secretary of Infrastructure and Environment of the State of São Paulo, Kathleen Garcia Nascimento, Assistant Secretary of State for Economic Development of Minas Gerais to the in occasion of the Opening Ceramony. to present and discuss the potential and policies for the sector.

Professionals in the photovoltaic electric and solar sector such as Ronaldo Koloszuk, chairman of the board of directors of ABSOLAR, and Dan Shugar, founder and CEO of Nextracker shared latest market information and insights with the 2,300 conference attendees.

Data released during The smarter E South America prove Brazil's ability to consolidate a prominent position in the global renewable energy scenario. According to ABSOLAR, in the last ten years, the solar source has already brought to the country more than BRL 93.7 billion in new investments, BRL 25.4 billion in public coffers and generated more than 540,500 jobs. In addition, it avoided the emission of 26.5 million tons of CO2 in electricity generation.

A study by Greener, a consulting company specializing in analyzing the solar energy market, registered strong market expansion in the first half of this year. The survey points out that the amount of equipment demanded by the sector in the period should enable investments of over R$ 35 billion to meet distributed generation and large solar plants, a volume higher than the R$ 21 billion moved in the same period last year.

The sector's accelerating development was also reflected in the movement and volume of business carried out within the exhibition pavilion. “With each edition, the event is bigger, as well as our space at the exhibition, which shows that the market is heated and still has a lot to grow and offer”, pointed out Rafael Ribeiro, country manager at Sungrow.

“Without a doubt, this is an atypical year because of the legal framework, we are anticipating many projects, so it has been very productive, and being here making direct contact with the public that already knows our products is a great opportunity”, added Ribeiro.

In the view of Zoltan Stein, commercial manager at Fotus, the qualification of visitors was one of the highlights. “Perhaps due to the entry into force of the legal framework, we have also received more integrators, a movement even above expectations. For Fotus, being at this event helps to show our positioning as one of the largest companies in the solar distribution market”, he highlighted.

For Luan Gabriel de Oliveira, Services Manager at Growatt, The smarter E South America proves its relevance to the segment “not only for its structure and organization, but also for the large number of visitors, who are mostly our direct target group, , who already know solar energy and our products, and come to find out about the latest news and close deals.”

“We are very pleased with the results achieved in this edition of The smarter E South America and also with the affirmation of Brazil as one of the protagonists in the global renewable energy market”, said Dr. Florian Wessendorf, General Director of Solar Promotion International GmbH, international organizer of the event, alongside Freiburg Management and Marketing International and Aranda Eventos.

“During the three days of the event, professionals from the sector were able to learn about new trends and launches in the segment, in addition to having access to qualified data, training and business opportunities. We are already looking forward to next year's event”, concluded Wessendorf.

Podcast with Florian Wessendorf at The smarter E South America 2022

Listen to the podcast with Florian Wessendort, Managing Director at Solar Promotion.

The webinar will shed a light on the possibilities it holds for Brazil's renewable future.

The Growth and Growth of the Global Energy Storage Market – Trends, Innovations & Developments