Three exhibitions, one special exhibition, one mission: setting the stage for developing a clean and advanced energy industry in South America.

Information about travel and accomodation

Choose from the collection of press pictures. 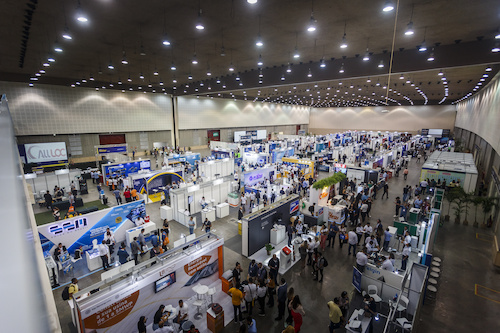 The Intersolar Summit Brasil Nordeste Conference came to a close in Fortaleza this Thursday. Its two days of lectures, debates and exhibits at Ceará’s Event Centre generated business and networking opportunities for 3 thousand participants. Renewable energies such as PV solar and green hydrogen were the main topics addressed, not only because these have been heating up the market and promoting a diversification of the energy mix, but also because they are regarded as representing the main future contenders in the country’s electricity sector.

The State of Ceará, which hosted this edition of the event, featured prominently in the Conference, starting with an keynote address by the head of SEDET’s Initiative for Attracting Industrial Development, Sérgio Araújo de Sousa. The state currently has 21 solar parks in operation and 74 solar park projects under construction, representing a total investment of around R$ 15 billion. In the same session, Joaquim Rolim, who is FIEC’s Energy Coordinator and President of CSEnergias/CE, presented an overview of trends and challenges for the renewable energy sector.

“Just as the world turns its attention to the energy shift, Ceará has been tracing an investment journey that emphasises new business development. Events such as Intersolar are a bridge through which we can promote our potential in the production chain and attract new development into our State, all within a sustainable and inclusive framework,” declared Francisco Rabelo, president of Ceará’s Development Agency (Adece).

The second day of the Summit (April 28) saw a debate among specialists on Hybrid Generation and Green Hydrogen, chaired by of Adece’s Director of Infrastructure, Expedito Parente Jr. “Green hydrogen has enormous significance as a mechanism for expanding, diversifying and adding value to the wind and solar industry in Ceará and Brazil. Adding wind and solar together, we have the potential to generate nearly 1,000 gigawatts, but we currently have only 3 gigawatts, or 0.3%. So we need to take a leap in the right direction so as to use this potential more fully,” declared Expedito.

Other topics debated by panels of prominent Brazilian and international electricity industry specialists during the Conference were Solar Photovoltaic Distributed Generation, Energy Costs in Brazil, and Power Storage in the Energy Shift. In all, more than 300 people attended the debates, which addressed technological, economic, political, legal and regulatory aspects of renewable energies.

For Iasmym Jorge, general manager of Meu Financiamento Solar, an Intersolar Summit Brasil Nordeste sponsor, the event prompts a great number of interactions between companies in the industry. “Opportunities like this are very important. They rally together entrepreneurs from our region, and indeed not only from Ceará but from the whole of the Northeast, and help companies like Meu Financiamento Solar get closer to them. The networking we see here not only helps us improve processes so that we can deliver better solutions, it also enlightens us about market developments,” she says.

LATAM's Largest Exhibition and Conference for the Solar Industry

Stay in the know.

Compelling reasons to choose The smarter E South America to showcase your products and services.

The Road to Carbon Neutrality with Hydrogen Cogeneration

In this webinar, Hydrogen Europe will present the position of hydrogen cogeneration in the European Hydrogen Strategy, complemented by best practice projects.